A Little Something in Yiddish. Conceptual Framework(s) for the Study of Yiddish Polish Cultural Contact in the 20th Century 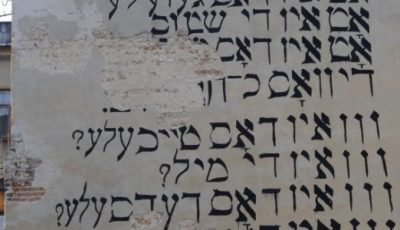 When in 1988 poet Marcin Świetlicki formulated in the now famous poem his sharp criticism of the rhetorics of cultural opposition and its possession by history, he wrote: „Instead of saying: I have a toothache, I’m/ hungry, I’m lonely (…)/ they say quietly: Wanda/ Wasilewska, Cyprian Kamil Norwid,/ Józef Piłsudski, the Ukraine, Lithuania/ Thomas Mann, the Bible, and at the end a little something/ in Yiddish” (trans. W. Martin). As Eugenia Prokop-Janiec has shown, in the 1980s Yiddish came to be treated as a part of the code of independent culture, and investment with it became a form of resistance. But what was this undefined „little something” and what tradition was underlying its presence in the Polish discourse? What meaning and content was it endowed with? How does this tradition bear on contemporary representations of the Jewish Polish past and the way we write the history of culture in Poland?

The talk is a discussion of existing and possible approaches to the study of Yiddish Polish cultural contacts in the 20th century, their limits, and ramifications. It is a working presentation of an on-going project. By turning to the history of Yiddish Polish cultural relations and their discourse, and interpreting them through a different lens of cultural studies, the study also seeks to think other ways of conceptualizing history of culture in Poland. An approach that includes the minority perspectives and respects their independence, and create a space where the „little something” turns into a complex polyphonic phenomenon in its own rights.