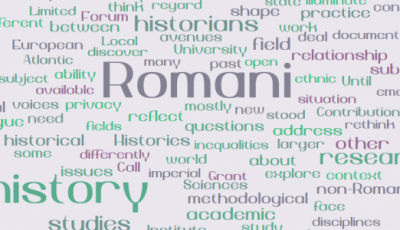 Workshop of the Prague Forum for the Romani Histories at the Institute of Contemporary History, Czech Academy of Sciences

On the sixth anniversary of the founding of the Prague Forum for Romani Histories, this workshop sets out to take stock of our collective efforts to promote the academic study of Romani history. Until recently research of Romani histories stood in the shadow of the work ethnologists, philologists, musicologists, anthropologists, and sociologists have done in Romani Studies. In the last decade, however, new projects have contributed significantly to the creation of an emergent field of Romani history. The workshop explores how research on the Romani past can illuminate and enrich broader issues in historical research. At the same time, it seeks to interrogate the methodological, ethical, and practical challenges of historical research in the context of Romani studies.

The workshop wants to focus in particular on the responsibilities Romani and non-Romani historians have in regard to Romani narratives and the limits of their ability to address them; how academic work can be understood in terms of social capital and gatekeeping when studying populations that have historically been deprived of avenues for economic and social mobility; ethical questions about the use of private documents and oral history research in case of people who face discrimination and state surveillance; and finally the ability of the digital humanities to either mitigate or exacerbate inequalities in access to information and privacy rights.

To explore new paths and persistent challenges in the field, we ask for the submission of papers that deal with concrete examples from Romani history (irrespective of period or region) that allow for further methodological reflection. It has become a truism in the field that it is difficult to discover unmediated access to Romani voices in archives. We would like to explore these erasures in the context of larger discussions in other history subfields about silenced voices, unacknowledged methodological assumptions, and the history of archives. Contributions can also reflect on the history of historiography and the role historians play in the complicated politics of Romani representation.

The following questions reflect some of the concerns that motivate our call:

Please send an abstract of your paper (approx. 300 words) and your CV until 15 April 2022 to romanihistories@usd.cas.cz.

Accommodation and travel cost:
We can offer free accommodation (thanks to the funding of the Strategy 21 AV – Global Conflicts and Local Interaction and thanks to the Project of the Grant Agency of the Czech Republic, no. 19-26638X). Funding will be also available to reimburse the travel costs for participants from Europe.