CfP: The Politicization of Xenophobia in Transatlantic Contexts: Past and Present 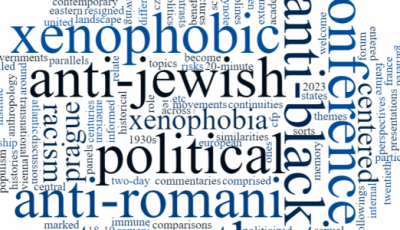 Prague Forum for Romani Histories (at the Institute of Contemporary History, Czech Academy of Sciences) in partnership with the University of Alabama at Birmingham and with Romani Studies Program at the Central European University in Vienna

Today, many people have become resigned to the fact that xenophobia is a central feature of the transatlantic political landscape. From the United States to France to Eastern Europe, political movements centered on the rejection of “the other” (immigrants; racial and sexual minorities, and so-called “internal enemies”) have garnered mass followings and have entered governments that were until recently seen as immune to the sorts of populism that marked the first half of the twentieth century. At this conference, participants will discuss politicized xenophobia in the past and today. We hope to bring together themes that: offer comparisons and contrasts between, for example, xenophobic movements in the 1930s and today; offer new perspectives on transnational xenophobia, in particular as they relate to anti-Romani, anti-Black, and anti-Jewish racism; and that show continuities and similarities between the past and the present.

The two-day conference will be centered around panels comprised of 20-minute presentations, with commentaries and extensive discussion. Topics from different disciplines are welcome (i.e. History, Anthropology, Political Science, etc.). Keynote lectures will be delivered by Angéla Kóczé (Central European University, Vienna) and Jonathan Wiesen (The University of Alabama at Birmingham).

Please submit at CV and a 1-page lecture abstract by December 1, 2022 to Jonathan Wiesen (jwiesen@uab.edu) and Kateřina Čapková (katerina.capkova@nyu.edu).

Thanks to the funding of the the Project of the Grant Agency of the Czech Republic, no. 19-26638X we can offer free accommodation. Only limited funding will be available to reimburse the travel costs.