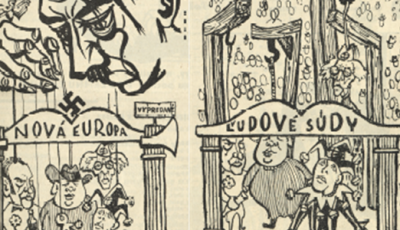 Concerning Retribution: The Holocaust on Trial in Slovakia, 1945–48

Similarly to other European countries that, immediately after the war, were facing the aftermath of German occupation and collaboration, a system of retributive justice was established in the restored Czechoslovakia as well. Even though anti-Jewish atrocities did not represent an exclusionary question in the lawsuits in the newly established People’s Courts, racially motivated crimes in general were covered in various paragraphs of the main retributive regulation, no. 33/1945 Sb. n. SNR. Analysing the trails of the main political representatives of the wartime Slovak State, which were held in the National Court, partly enables one to trace out the official anti-Jewish policy and its mechanisms at the state level. On the other hand, regional cases, which were in the jurisdiction of the District People’s Courts, also raise the question of the responsibility of local aggressors, co-perpetrators, and eye-witnesses amongst the Slovak majority. This microhistorical perspective is crucial for analysing the Jewish-Gentile relationships in their wider social context in the years of persecution and partly in its aftermath. Using the collections of the District People’s Court in Banská Bystrica, this presentation explores the struggle of Holocaust survivors in Slovakia for justice and the ways in which these crimes were judged in the early years after the Liberation.