Who Will Edit Our History, or Challenges of Editing Holocaust Sources 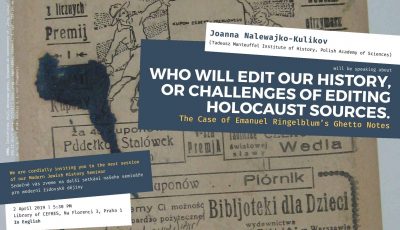 In September 1939 a Polish-Jewish historian, teacher and social activist Emanuel Ringelblum (1900–1944) began taking notes on various aspects of wartime reality, an activity he continued until January 1943. It was the beginning of a wider documenting project, later known under the codename of “Oneg Shabbat” or the Underground Archive of the Warsaw Ghetto. They were unearthed after the war and are now held in the Jewish Historical Institute Archive in Warsaw. A small part is located in Hersh Wasser Collection, YIVO Institute for Jewish Research in New York.

Ringelblum’s notes were published in the original language (Yiddish) in Warsaw in 1952 (Notitsn fun varshever geto), 1961–1963 (Ksovim fun geto) and in Tel Aviv in 1985 (reprint of the 1961–1963 edition including notes from the Hersh Wasser Collection). The Polish translation was prepared by Adam Rutkowski in the late 1950s, but was withdrawn from the printing house following the antisemitic campaign of 1968. It finally came out in 1983, edited by Artur Eisenbach, under the title Kronika getta warszawskiego.

In my lecture I would like to share some of my experiences from preparing a new, critical and completed edition (Pisma Emanuela Ringelbluma z getta, ed. Joanna Nalewajko-Kulikov, transl. Agata Kondrat [et al.], Warszawa 2018, series „Archiwum Ringelbluma. Konspiracyjne Archiwum Getta Warszawy”, vol. 29). I will show the differences between the new edition and the previous ones and will discuss problems that arise upon editing a source which reached us as an unfinished draft which was never intended to be published in this form.

Joanna Nalewajko-Kulikov is Associate Professor at the Tadeusz Manteuffel Institute of History of the Polish Academy of Sciences. Her research focuses on the history of East European Jewry in the 19th and 20th century, history of Yiddish culture (especially Yiddish daily press) and Polish-Jewish relations. Her books include, among others, Obywatel Jidyszlandu. Rzecz o zydowskich komunistach w Polsce (2009; English translation forthcoming 2019) and Mowic we wlasnym imieniu. Prasa jidyszowa a tworzenie zydowskiej tozsamosci narodowej (2016). For the publishing series “Archiwum Ringelbluma” she edited memoirs of Tsvi Prylucki (2015) and Emanuel Ringelblum’s notes from the Warsaw ghetto (2018). She is currently working on a book-length project devoted to Yiddish press in interwar Poland.

The seminar is intended to provide a platform for academic discussion about the latest research on Jewish history especially of the last three centuries. Though primarily focused on the Jews of central and east central Europe, the seminar also includes topics related to the Jews of other regions. The seminar is further enriched by including topics not directly concerned with Jews, but enabling one to see Jewish history from other perspectives (for instance, the perspective of other marginalized communities).

Despite our preference for the methods of historical research, the organizers welcome multidisciplinary approaches to the topics, including those of sociology, political science, religious studies, and art history.