Varieties of Technocracy. From Knowledge Production to State Power 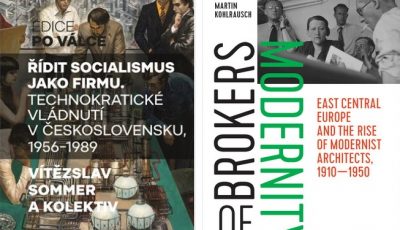 The first seminar of the Institute of Contemporary History after the summer break will be dedicated to two new books about the role of experts in shaping and governing European states in the interwar and postwar era. Martin Kohlrausch will talk about the outcomes of his new monograph Brokers of Modernity: East Central Europe and the Rise of Modernist Architects, 1910-1950 (Leuven 2019), and Vítězslav Sommer will present his book Řídit socialismus jako firmu: Technokratické vládnutí v Československu 1956-1989 [Running Socialism Like a Company: Technocratic Governance in Czechoslovakia, 1956-1989] (Praha 2019, co-authored by M. Spurný and J. Mrňka).

Brokers of Modernity reveals how East Central Europe turned into one of the pre-eminent testing grounds of the new belief system of modernism. By combining the internationalism of the CIAM organization and the modernizing aspirations of the new states built after 1918, the reach of modernist architects extended far beyond their established fields. The book highlights the dynamics of modernist architects as a group, including how they became qualified, how they organized, communicated and attempted to live the modernist lifestyle themselves.

The main idea discussed in the publication Řídit socialismus jako firmu is that Czechoslovak Reform Communism contained a contradiction between, on the one hand, the emancipation program of democratic socialism and, on the other hand, technocratic notions about socialism as a government of scientific rationality and economic efficiency. The tension between democratization and government by experts was not only a dilemma of the Prague Spring; it was also a starting point of the quick establishment of the consolidation regime that followed the Soviet-led intervention, and of the political stability that lasted until the political and economic upheavals of the 1980s.